A rattan cast created to protect the damaged wing of a toy parrot and a broken plate held together with steel staples feature in R for Repair, an exhibition of repaired objects presented at the V&A museum as part of the London Design Festival.

Curated by Jane Withers and Hans Tanthe exhibition is the second edition of R for Repair, and follows the first iteration of the show held in Singapore last year.

The show was presented in London V&A the museum includes 10 damaged objects repaired by 10 different designers from Singapore or the UK. They are displayed together with three repaired items from the original exhibition.

In response to an open call, members of the public were invited to contribute sentimental but broken objects to the project. Designers selected by Withers and Tan then repaired the items in various creative ways.

Designer By Si Ying created a rattan and wire cast and belt for Graham Secrets, a toy parrot owned by UK-based Oli Stratford who was a gift from the owner’s parents on his 30th birthday.

Originally made by a Danish silversmith and designer Kay Bojesen in 1954 the object was damaged by Stratford’s cat. Ying created a cast for the puffin’s wing in Singapore using an intricate weaving technique.

“We wanted to pair designers who would be sympathetic to the owner’s emotional attachment and what are often quite moving stories behind the objects and why the owners value them, but who might also have an unexpected take on the object and add new layers of meaning, enriching this evolving narrative of ownership,” Withers told Dezeen.

“We were also looking for designers who could bring interesting techniques and unexpected experiments to the repairs.”

Another item that was repaired for the 2022 edition of the exhibition is an antique 18th-century nurse’s chest owned by Eleanor Suggett Stephens in Great Britain, which she inherited from her grandmother.

Suggett Stephens discovered that the chest contained never-before-seen sketches and watercolor paintings by her grandmother, who wanted to be an artist but never achieved her dream.

London based designer Rio Kobayashi used traditional Japanese joinery techniques to raise the feet of the furniture, and also created a large tabletop designed to display and celebrate the secret artwork.

Kobayashi used walnut, ash, cherry, sapele, paint and glass to repair the chest, which Suggett Stephens said “represents the creative dream that never happened for [my grandma] and reminds me how lucky I am to have a career in the arts.”

Other objects in the exhibition include a porcelain plate that broke in the middle and was repaired with steel staples and epoxy glue from Studio Dam in Singapore.

British owners Karen Birkin and screenwriter Andrew Birkin, brother of actress Jane Birkin, sent the record for repair with a completely open brief. Andrew Birkin joked that Studio Dam could make a spaceship out of it. 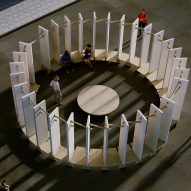 In response, the multidisciplinary studio took visual cues from Stanley Kubrick’s film 2001: A Space Odyssey, which Andrew Birkin worked on early in his career.

Studio Dam was informed by juci, a traditional Chinese porcelain repair technique involving the use of metal staples.

“On the one hand, the primary motivation was to bring creativity repair through design,” Tan explained, discussing the exhibit.

“At the same time, we thought having designers and objects from two countries would add a dimension to the project as a design and cultural exchange.”

Withers also added that the exhibition intends to celebrate the repair process and encourage the idea of ​​giving possessions a new lease of life.

“I think it’s important to broaden the discussion around repair and explore the psychological as well as the functional dimension,” Withers concluded.

“To understand why we keep things and how that can inform the design of products. How can things be designed with repair in mind so that they improve with age?”

As the London Design Festival kicks off in the capital, you can see other installations that are part of the event, such as a collection of rotating stone chairs by Sabine Marcelis.

The photography is off Zuketa film production.

R for Repair is on display at the V&A in London from 17 September to 2 November.