Fashion house Balenciaga has opened a couture store with smoked-glass-panelled walls in the same building as its original couture salon in Paris.

The store is located beneath Balenciaga‘s historic atelier at 10 Avenue George V, which was recently renovated to exactly replicate the interior of the original couture salon that was first opened in 1937.

“The newly renovated space at 10 Avenue George V is dedicated to preserving Balenciaga’s heritage in its original couture location, first opened in 1937, as well as creating a couture for today,” said the brand.

The design of the store beneath the couture salon was created by long-time Balenciaga collaborator Sub, a Berlin-based architecture studio that was founded by Niklas Bildstein Zaar and Andrea Faraguna.

The boutique’s exterior is marked by oversized serif Balenciaga signage, a nod to Balenciaga’s 20th-century branding that also forms a distinction from the narrow, sans serif typeface that currently identifies the brand.

Beneath the signage, four arched openings frame swooping curtains that are given a golden hue by the brown-tinted glazing.

The interior of the couture store echoes Balenciaga’s raw architecture concept, which was applied internationally across the interior of its stores, but this edition has been clad in panels of tinted glass instead of concrete.

Between the unfinished but glass-clad walls, ash-hued curtains conceal carpeted areas while wrinkled-leather ottomans were placed throughout the two-storey store. 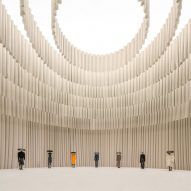 Wrought iron balustrades and a curving marble staircase, with glass panelling slotted around it, hint at the building’s history and the former decor and interior scheme of the atelier above.

“The concept of the couture store is a gateway to couture, which remains a very closed universe, especially for new generations,” said Balenciaga CEO Cédric Charbit.

“In this new store, products, made-to-measure services and retail excellence are a reinvention of the Balenciaga client experience,” said Charbit.

“It is exciting to be able to present this level of craft, creativity and made-in-France savoir-faire in our historical address.”

Metal shelving was decorated with couture items, ranging from artisanal to technological, from the brand’s most recent Autumn Winter 2022 couture show.

Items on display include its speaker bag, which was created in collaboration with Danish audio brand, Bang & Olufsen.

Earlier in 2022, Balenciaga wrapped its Mount Street store in London in a bright pink faux fur to celebrate its Le Cagole bag.

Photography is courtesy of Balenciaga.